The toponym Sorteny, which according to Manuel Anglada1 would mean "la plana de les bruixes" (the valley of the witches), evokes the botanical value and the ancestral use of medicinal plants in the valley.

The Natural Park of the Sorteny Valley was created by municipal decree on 15 June 1999.

The management objectives of the nature park are as follows:

The natural park is a hunting reserve managed by the Government of Andorra. It is part of the Maragda Network at European level and at the same time its wetlands are included in the RAMSAR list of wetlands of international interest.
About a hundred habitats, most of them of European interest, with more than 800 species of flowers, the diversity of the fauna, with many species of vertebrates and invertebrates, show the great biological diversity of a natural area which, despite its small size (1,080 hectares), is one of the richest valleys in the Pyrenees from the heritage point of view.

Naturalists, privileged visitors to the natural park, will be able to appreciate a great diversity of birds with large birds of prey such as the golden eagle, the common vulture, the bearded vulture or the short-toed eagle; the old woods with monumental old trees are home to protected species such as the capercaillie and in the more open areas you can find grey partridges and in the alpine meadows, white partridges. From August, at dawn or late afternoon, it is possible to observe herds of Pyrenean chamois of more than 40 individuals and to hear deer in the forested areas. A micro-endemic reptile of the Pyrenees, the Aurelio’s rock lizard, is found at the eastern edge of the valley. The Pyrenean newt, the salamander and the red frog are the emblematic amphibians of the park. Finally, specialists and lovers of the grass microcosm will be able to enjoy thousands of shapes and colours, especially with the great diversity of butterflies.

The flora of the Sorteny valley expresses all its diversity and forms colourful carpets, from meadows to scree and rocks which are covered with specialised species such as androsaces or saxifrages ; There are also special species such as the sundew, insectivorous species, splendid orchids and other elegant species such as the swertia or felwort, the Pyrenean star of Bethlehem, the Pyrenean lily; finally, we can find other rare species such as the Lappish willow, a potentilla which in Andorra can only be found in Sorteny when climbing to the peak of Estanyó or the Andorran bellflower.

At the end of the summer, guided by the sound of the cowbells, we can cross the protagonists of the mountain for centuries and millennia: the large livestock (cows and mares) and in the plains, the small livestock (sheep) that cross the border or administrative boundaries that are not very significant

for them. Livestock farming maintains a stable agro-pastoral balance over time, with control of vegetation dynamics while maintaining good pasture quality.
The livestock follow routines defined in the “Taba”, a document that since the end of the 19th century has set out the way livestock farming works and in particular the circulation in the different pastures such as the "cortons", among others those of Sorteny, or the "emprius" (sort of lending). The valley of Sorteny provides pasture at the end of the season, as its orientation and configuration offer better climatic conditions and productivity. Large livestock can remain in the valley until the first snowfall, which makes it easier for farmers to manage.

Fly fishermen can enjoy the river of Sorteny and the lake of Estanyó, in restricted areas for catch-and-release fishing or, depending on the day of the week, for catches (information at the Tourist Office).

In winter, the peaks to the east, the Pic de l'Estanyó (2,915 m) or the Pic de La Serrera (2,913 m), attract mountain ski enthusiasts. At the bottom of the valley, however, families can easily climb on snowshoes at least as far as the guarded refuge and, on full moon nights, discover a phantasmagorical and immaculate landscape, with a silence conducive to meditation.

The Sorteny valley is an exceptional area that must be respected just like the other users of the valley, participating in the conservation of the landscape, vegetation and wild or domestic animals, respecting the established rules, so that future generations can enjoy it as much as we do. 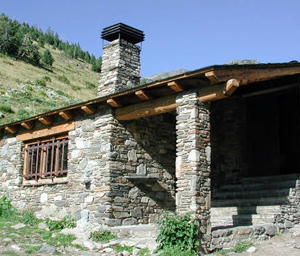 Schedule Summer
(June to September 30 and May Weekends)

We advise you to arrive at the refuge before 18:00 to validate your reservation.

Check In / Check Out

Cancellation policy up to 72 hours before cancellation without charges.

Thank you for refraining from cooking and picnicking in the refuge.

Any customer has the right to cancel his reservation made before the date of arrival, in accordance with the conditions that take into account the specificity of the accommodation and the chosen service:

We offer half board (dinner, overnight stay, breakfast and shower)